This post may include affiliate links. If you purchase something through the link, I may receive a small commission at no extra charge to you. Please read my disclosure policy for more details.

Learn how to create a pretty and functional chicken coop in just a few basic steps. Rustic, modern and beautiful with a few pops of flair! Your DIY chicken coop is just a few short steps away. 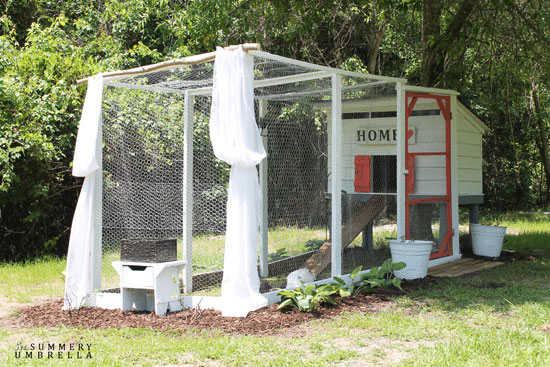 Side note and a little back story first though. Last week I shared with you my favorite 10 Pretty and Functional Chicken Coops that I found online, and I was beyond inspired to also create a gorgeous space for my future feathered friends.

Future? Yup. You heard me right. At the moment we have two little ducklings that are currently residing in the coop since they are only a few months old. We have a scary population of predators in our area so until they get a little bit bigger that’ll be breaking in the new digs.

So, without further interruptions, I present to you my pretty, little coop! 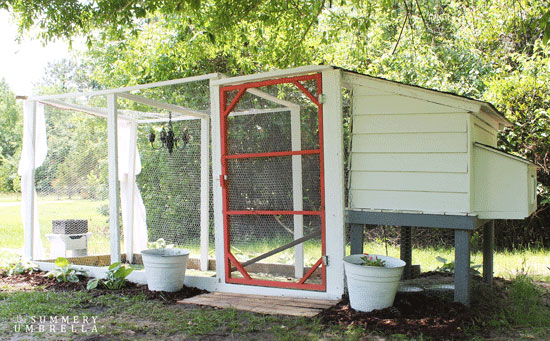 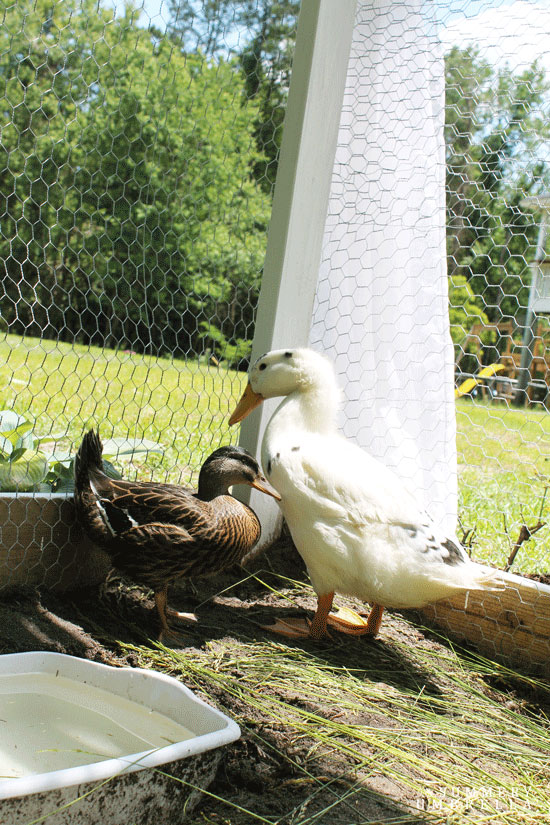 Place the Coop In the Shade

Since summers can be quite dreadful down here in the South so we tucked it next to the woods and under a tree to provide shade and coverage against the elements.

I believe it was last fall that I removed our screen door from the front of our home, and we were originally going to use it for the coop. However, we forgot to take into account its height when building the “coop house” and it was entirely too big! No worries though. Mike just built one to fit, and I absolutely love it! Isn’t this coral color amazing?!?

I definitely wanted to add some kind of stepping stones or a mat to the front of the door and was thrilled when I found part of this pallet still intact. It worked out so well in this spot! 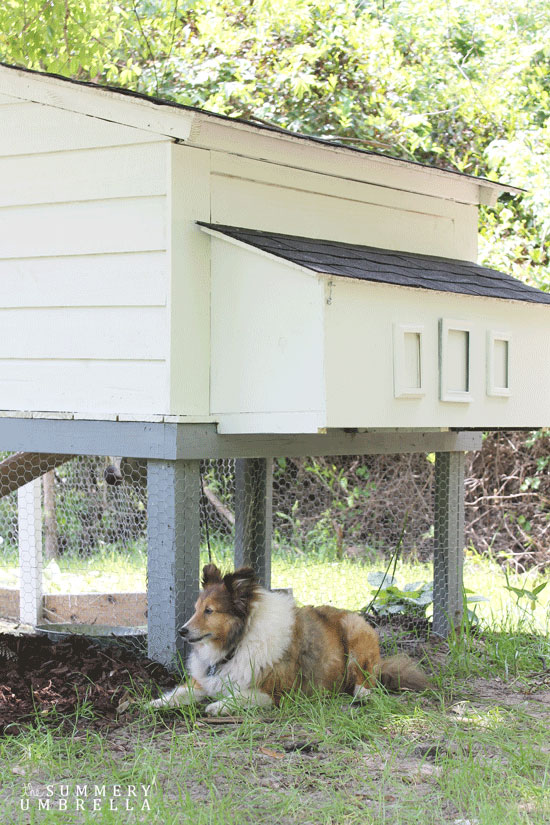 Even my fluffy puppy (aka. Kyler) loves this area. He’s so funny with smaller animals. He thinks he’s all big and bad!

Use Sandy Areas to Track Predators

In case you’re wondering why I didn’t mulch all the way around our coop (or why there is a lot of sandy areas), we actually did this on purpose.

Seriously! Remember how I said we have a thriving population of predators in the area? We actually check every morning for prints in the sand around the coop to see what we’re dealing with and if we have any “leaks” for them to gain access.

So far we’ve confirmed a few raccoons and a bear. Scary, right? I know there’s more than just this, but hopefully, they’ll stay far, far away!

This back area was just so plain so I added a few picture frames that I had on hand and painted them white. 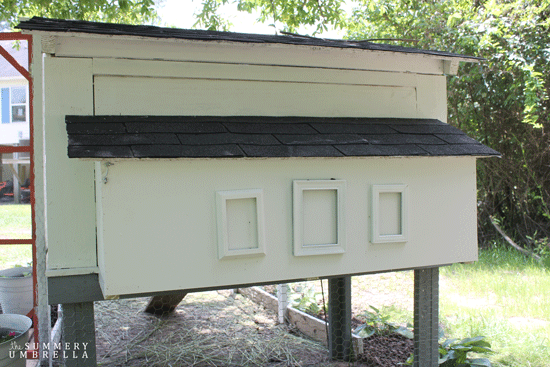 Also, the coop actually has three doors. One on the front, one above the picture frames (to collect eggs) and then the last is on the other side where we can scrape out the lovely doodles. 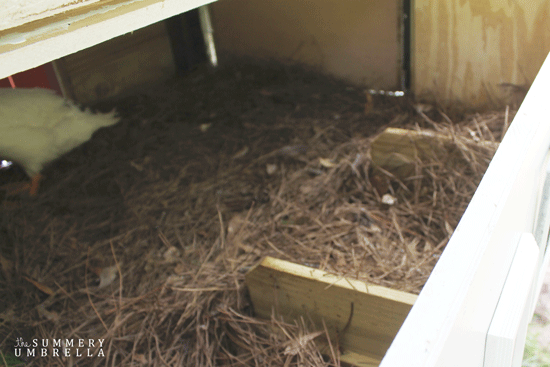 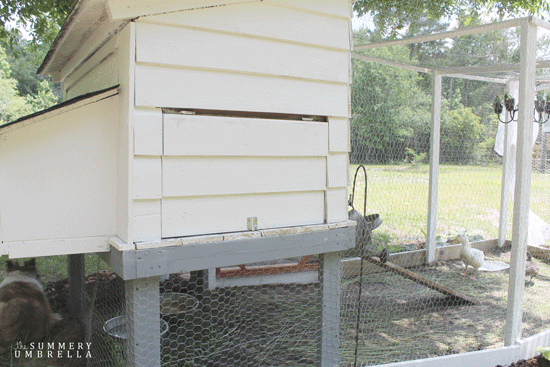 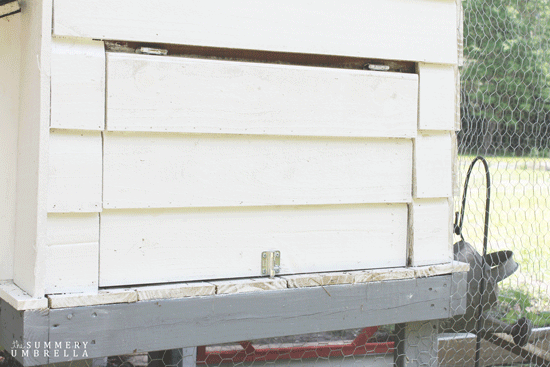 All of our hostas around the coop are actually transplants from underneath our front porch. They were just too pretty to be hidden away, and plus, I didn’t want to spend a ridiculous amount of money buying more plant life.

If you’ve been following my blog for a while you probably already know about my little obsession with using branches as curtain rods. You know I couldn’t resist adding a little bit of elegance to the front of the coop! ;) 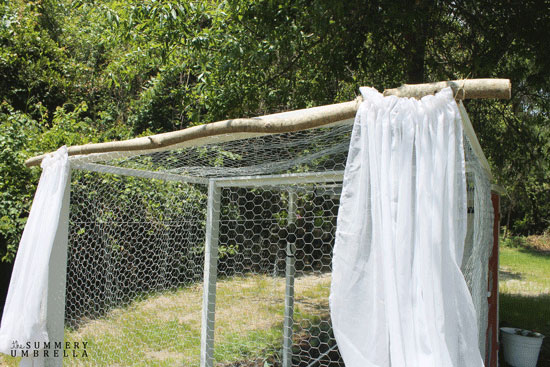 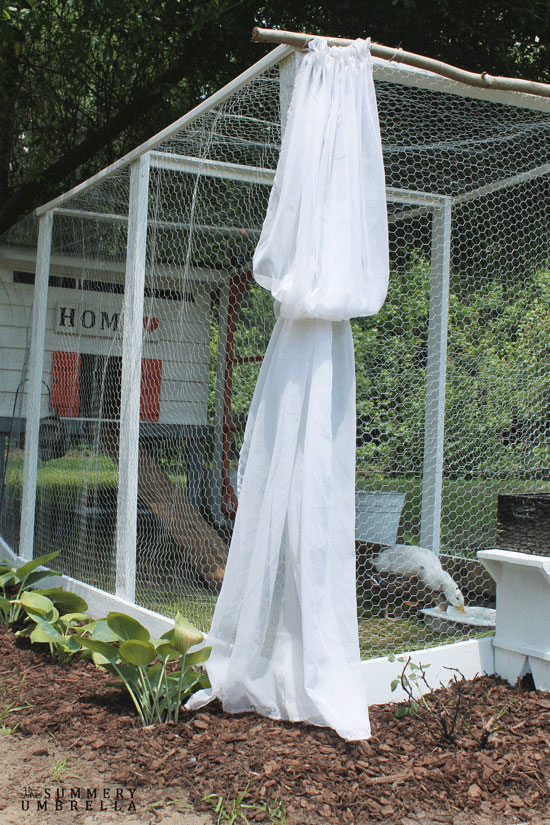 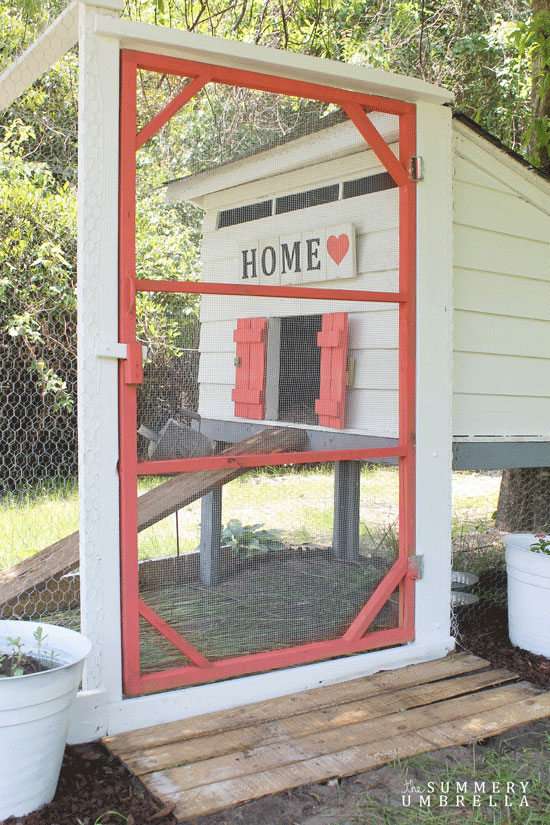 These knockout rose bushes are so pretty even without roses! They were on sale for $4.99 a piece since they were nearly dead when we got them, but we nursed them back to health and they’re looking awesome now!

And here are our little duckies. Fluffy Wuffy and Poodle. Heck yea, I named them! Haha. Just kidding. These names are all Ava.

Do you remember this Upcycled Flower Planter Chandelier? I was trying to find the best place to put this beauty, and then it dawned on me how perfect it would be in the coop. Doesn’t it completely make this area? Just a hint of classy and rustic charm. 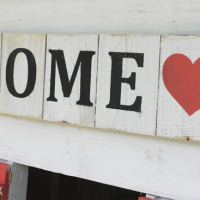 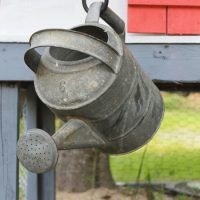 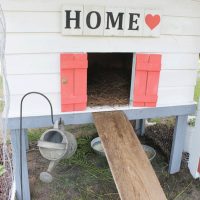 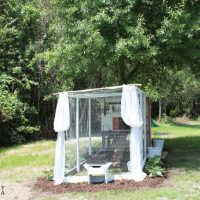 Originally I put this vintage watering can outside of the coop, but it just didn’t work. Now, it’s the perfect addition inside!

Thanks for stopping by and checking out the coop! Have a great weekend :) 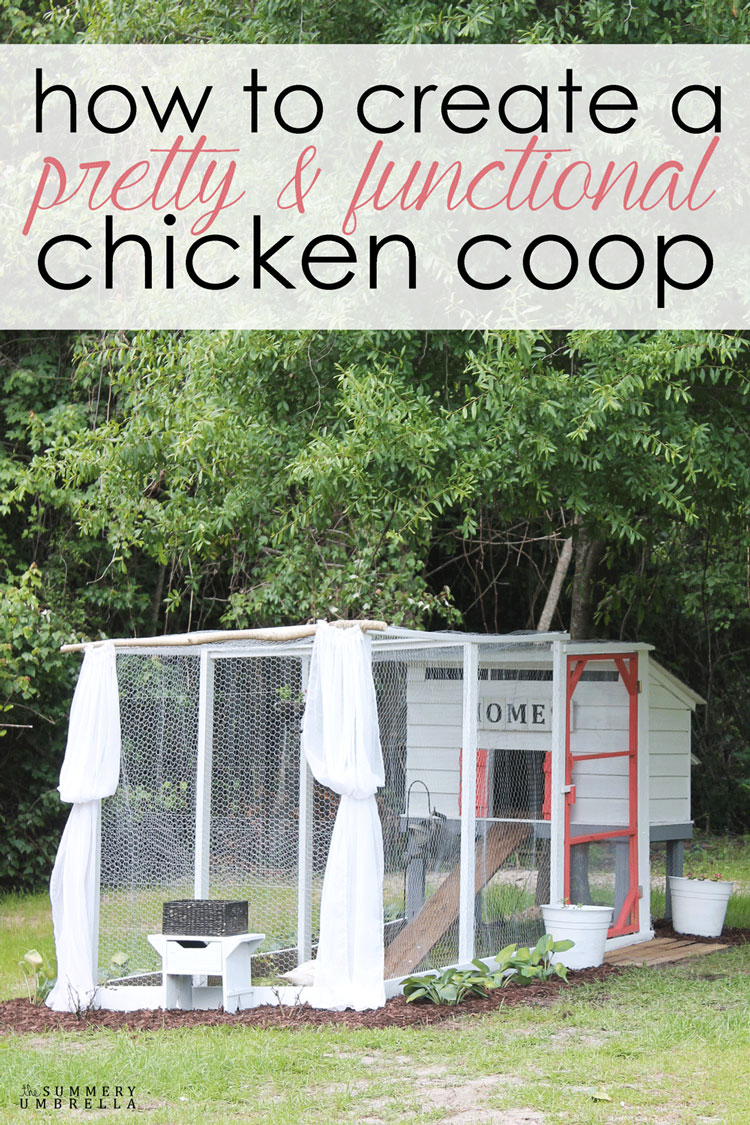 LZ is an artist who loves creating illustrations, custom hand lettering and patterns for gifts, home decor, fabric, and wallpaper. She is also the creative mind behind The Summery Umbrella where she shows you how to make handmade signs, various DIY projects and gorgeous home decor.

When she’s not dreaming up new projects and designs you can typically find her drinking her fair share of coffee, hanging out with her super handy husband and her sweet and sassy daughter. They all have a hard time sitting sit so this family is constantly on the go!

This site uses Akismet to reduce spam. Learn how your comment data is processed. 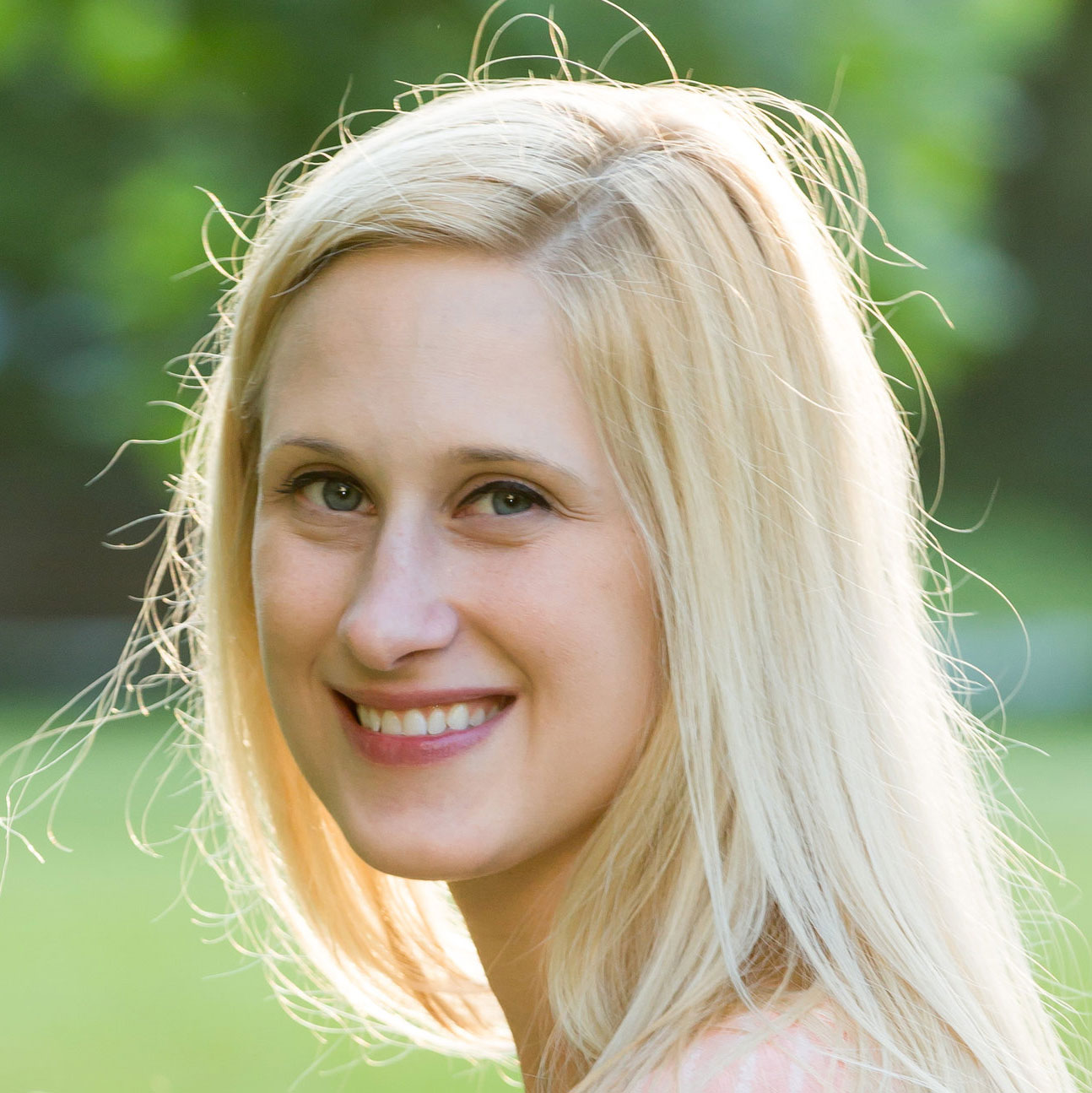 Hi! I'm LZ, and welcome to my humble abode! Don't be shy. Come on in! This is my happy place where I share my life, creativity as well as my quirky and country sense of humor on a daily basis. So, grab yourself a tall glass of something yummy, and let me introduce you to my realm. :)

I want to find…

Day 11 - Bluebirds. I'm a sucker for the color blu

Day 9 - The chipping sparrow. I was a little nervo