This post may include affiliate links. If you purchase something through the link, I may receive a small commission at no extra charge to you. Please read my disclosure policy for more details.

Our Brick and Mortar Shop Update

Can you believe that Mike (aka. Super Talented Hubby) and I have been running our brick and mortar shop for three months already?! In some ways it seems like we have been doing this for a lifetime.

And in other ways it feels like we’ve just barely gotten our feet wet!

You know, everyone I have ever talked to who has/does run a similar shop told me that it was going to be A LOT of hard work. I never once doubted their input, but holy china cabinet… I had no clue that it would this amount of work!

It really is a job that should be accomplished by an entire team, but with that being said, I’m so happy that Mike and I are able to pursue this adventure together. 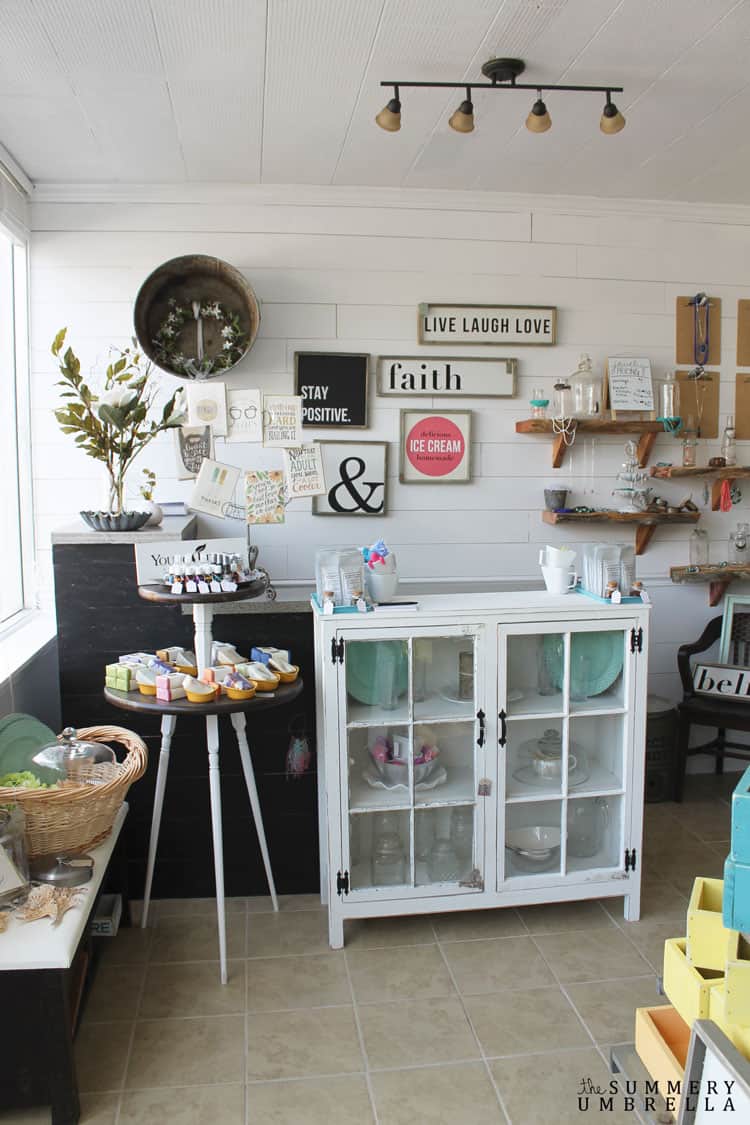 As many of you know, we are very familiar with the online shopping realm as this is the avenue we have been most actively pursuing for the past four years.

I have to admit though, we both feel a little out of our element with the “real world” since it soooo, soooo, soooo different from online shoppers. However, it’s really awesome though because we’re able to connect with our customers now in a way we never could before.

We’ve received a lot of feedback on a variety of topics involving the shop, and every week we make little improvements to help the shop get to where it needs to be.

For instance, we had a veryyyy, veryyy small jewelry collection on one shelf that was in a corner. A few of our customers suggested not only expanding, but creating a display that was more of a focal point.

It took a minute (ok, ok… months!) to figure out what I wanted to do, but how cool does this new jewelry display look now?! 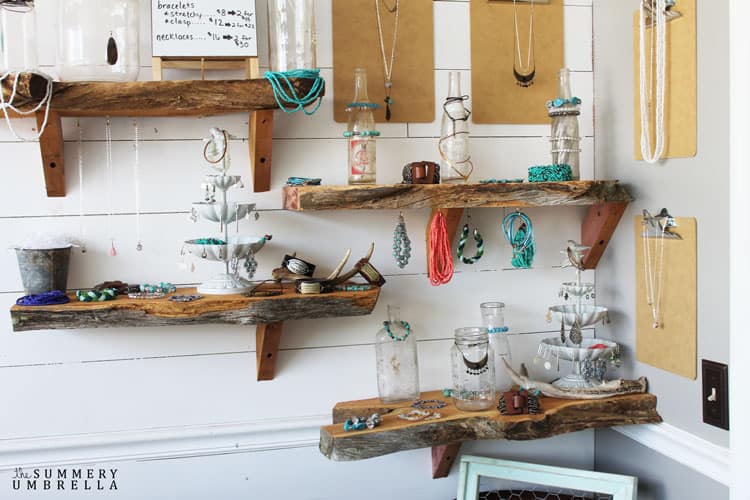 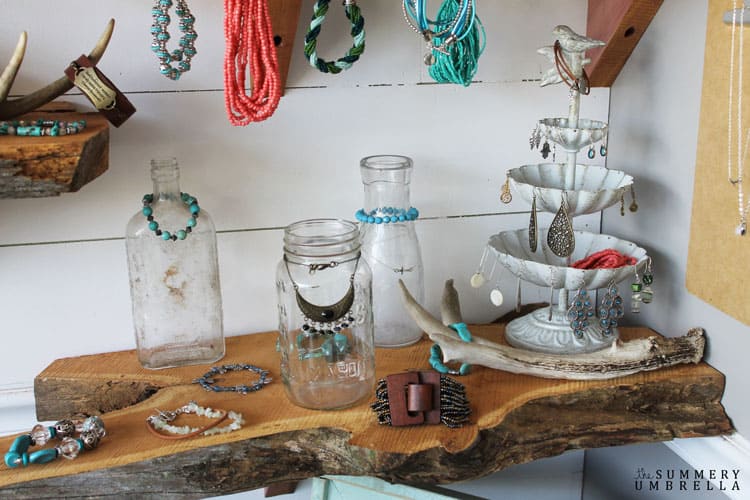 You know how much I love my reclaimed and natural edge cut wood! 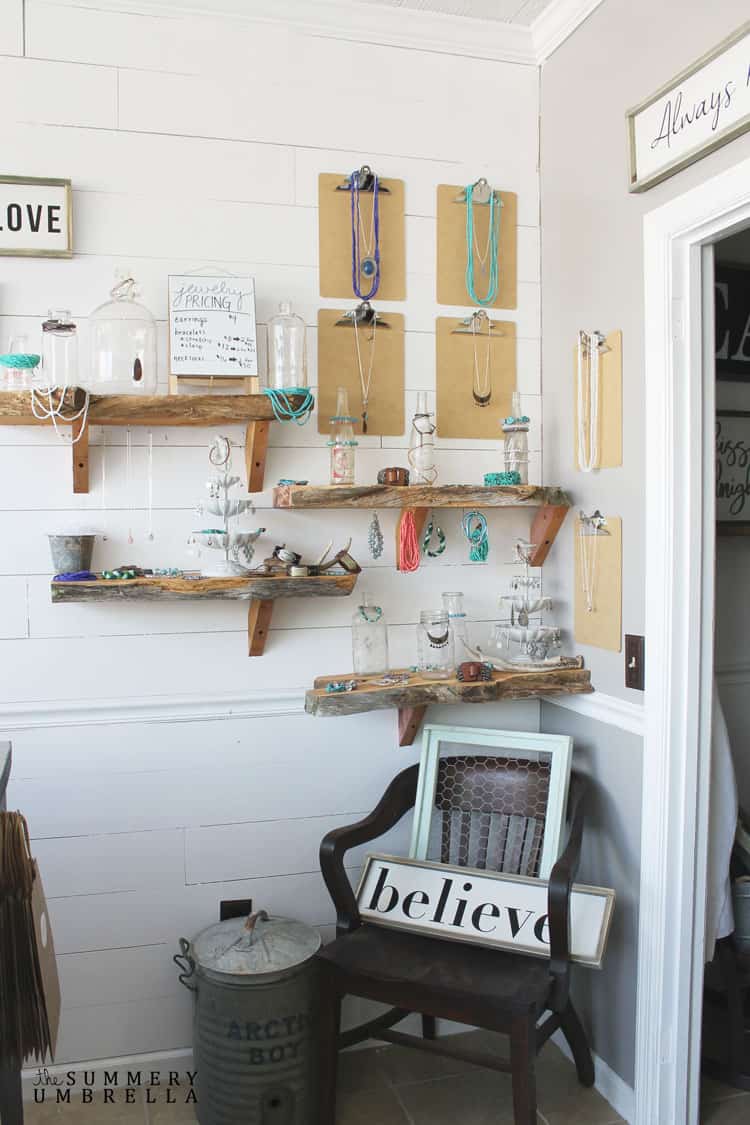 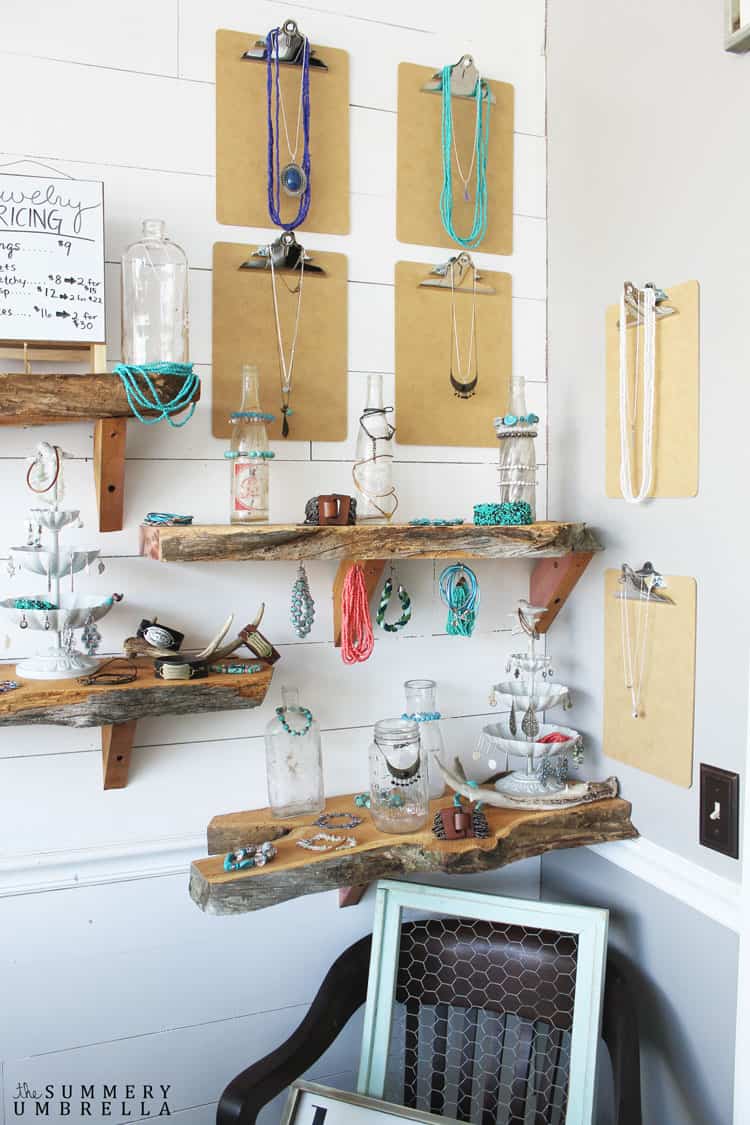 In fact, I would say that a whopping 75% of this jewelry that you see in this display is even created by us!

We never in a million years thought that we would start creating our own jewelry, but since I was looking for a specific aesthetic to compliment our shop it was actually just easier to do it ourselves.

Who knew we’d end up loving this creation process too! 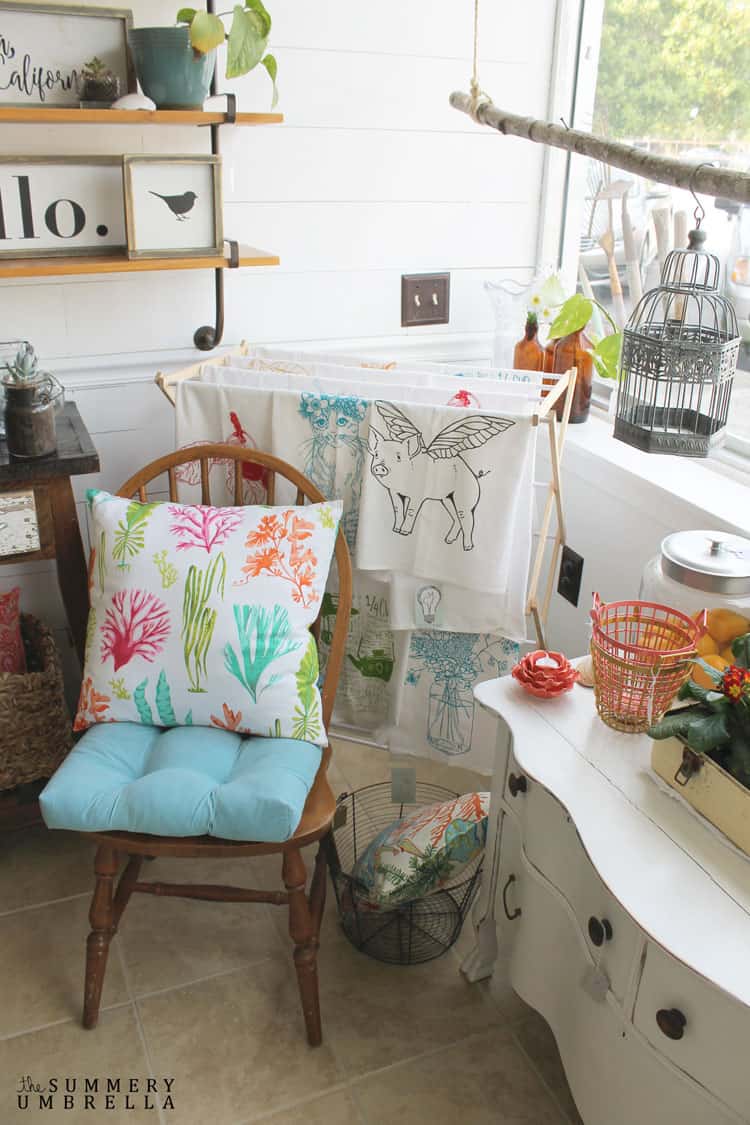 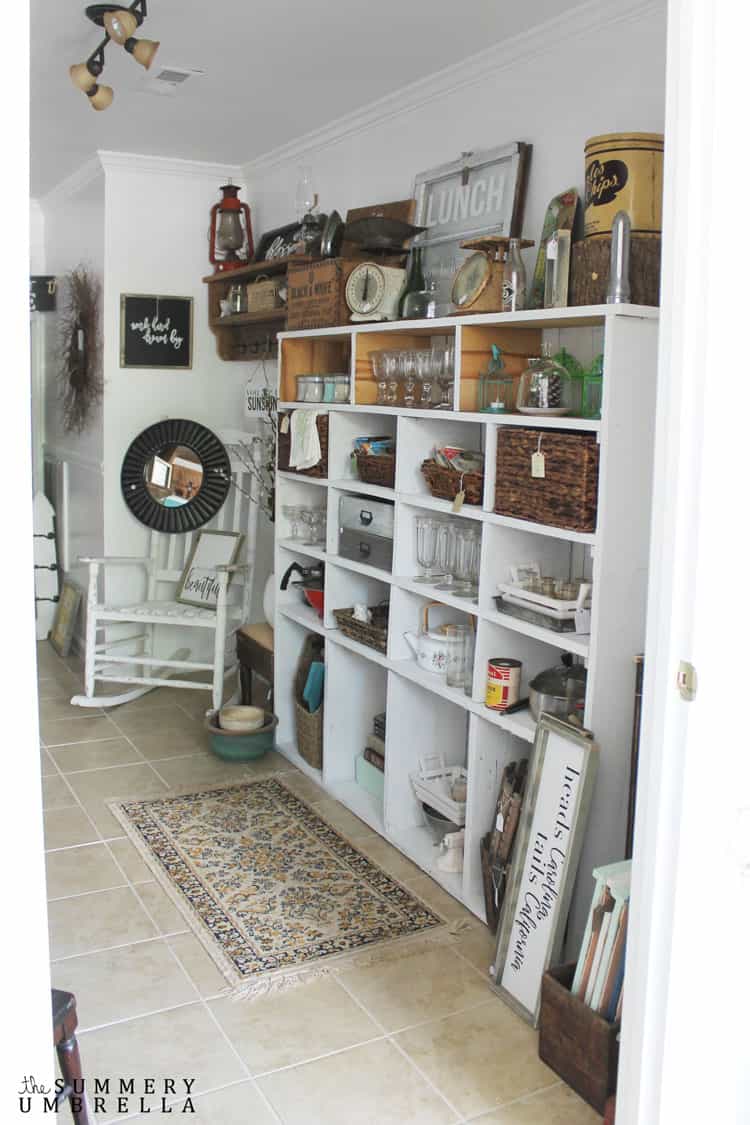 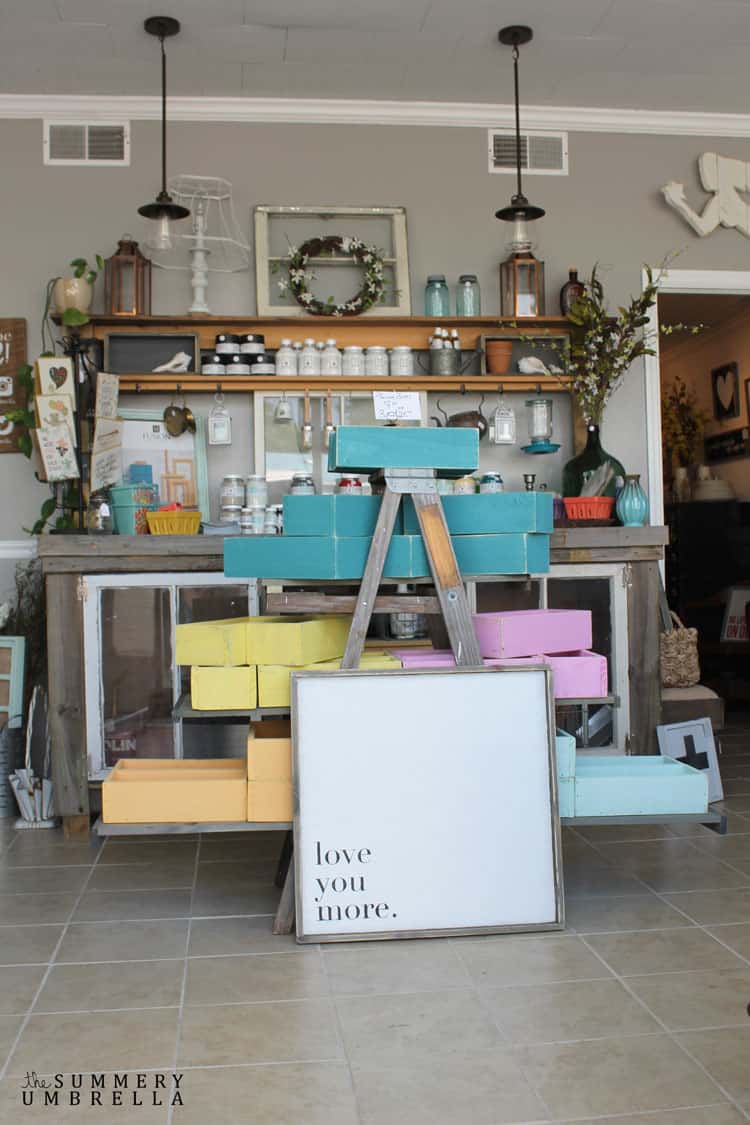 We’ve come such a long way, and I couldn’t be prouder with how much we have accomplished! We’ve been asked several times what we have planned for the future of the shop, and honestly… we’re just taking it one step at a time.

There is so much to be thankful for, and I’m of the mindset that I don’t want to rush the process.

LOL. OHhhh I am such cornball! 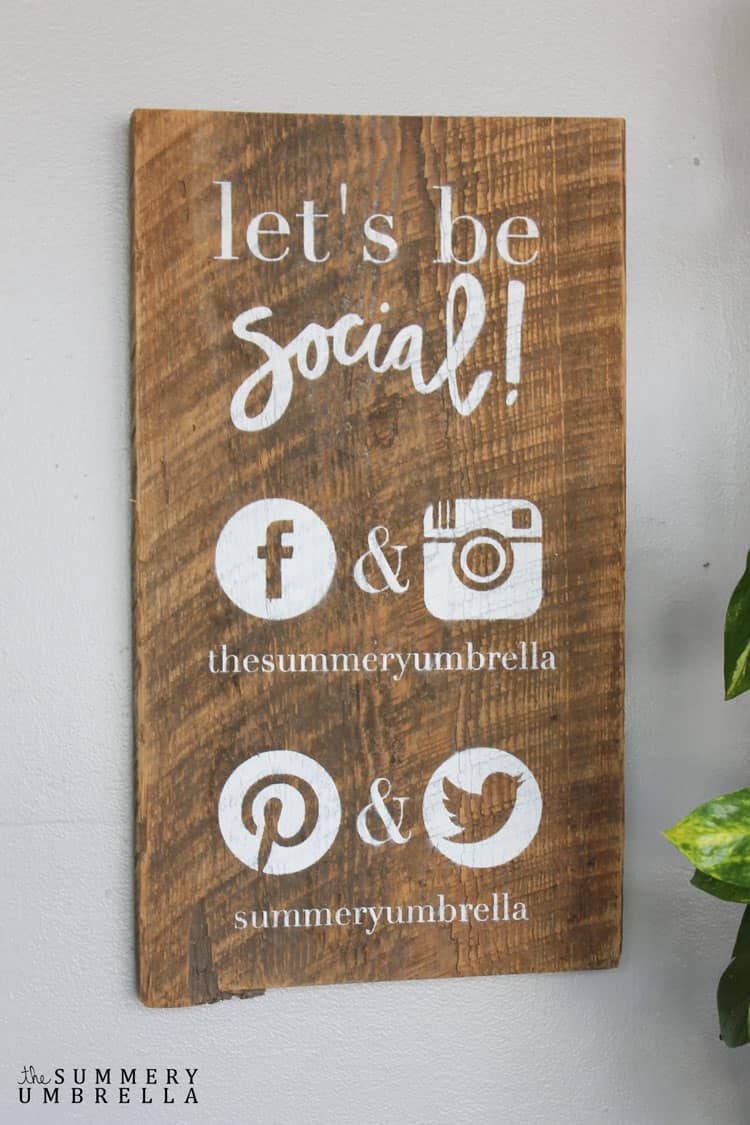 LZ is an artist who loves creating illustrations, custom hand lettering and patterns for gifts, home decor, fabric, and wallpaper. She is also the creative mind behind The Summery Umbrella where she shows you how to make handmade signs, various DIY projects and gorgeous home decor.

When she’s not dreaming up new projects and designs you can typically find her drinking her fair share of coffee, hanging out with her super handy husband and her sweet and sassy daughter. They all have a hard time sitting sit so this family is constantly on the go!

This site uses Akismet to reduce spam. Learn how your comment data is processed.

Hi! I'm LZ, and welcome to my humble abode! Don't be shy. Come on in! This is my happy place where I share my life, creativity as well as my quirky and country sense of humor on a daily basis. So, grab yourself a tall glass of something yummy, and let me introduce you to my realm. :)

I want to find…